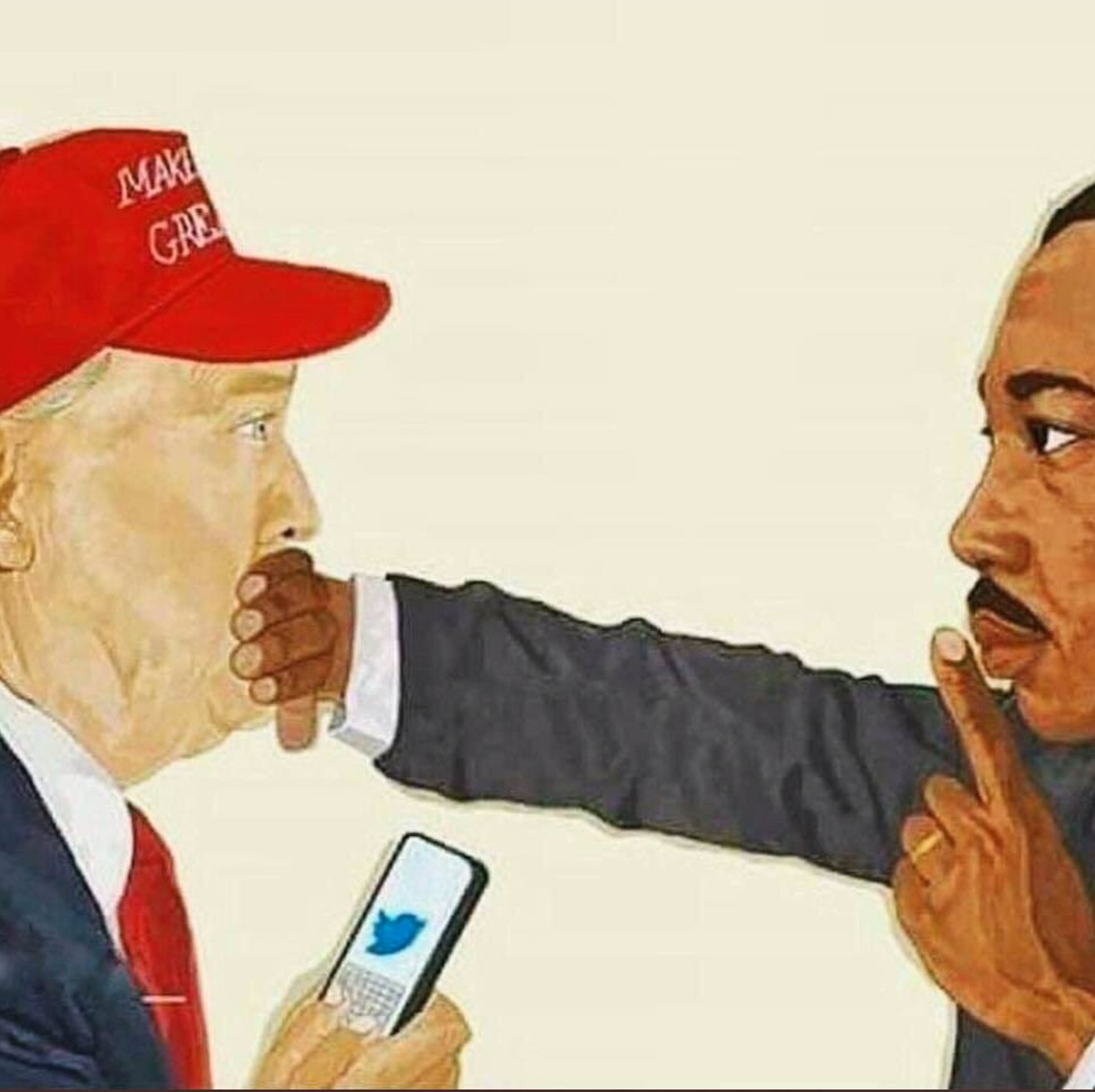 This Martin Luther King Day would be a good time to note the transformation of MLK’s legacy. White conservatives are doing their best to appropriate his message and shape him into their own image. (Just imagine their raging hate if they knew of his socialist leanings.)

They now share his pain, and relate to the discrimination and racism he endured. Yes, this is true. Stay with me, despite the fact there has never been a thing called, "Driving while white".

But they still find delight in hating and demeaning Black Americans, especially immigrants and refugees.

On the night that Ruth Bader Ginsburg died, Donald Trump made a campaign appearance in Bemidji, Minnesota where he stoked nativism in a state that has resettled large numbers of refugees from Somalia.

“One of the most vital issues in this election is the subject of refugees,” said Trump, who has fought to block humanitarian resettlement of displaced people in the United States. “You know it perhaps better than almost anybody. Lotsa luck! Are you having a good time with your refugees?”

The president then spewed bile at Ilhan Omar, a Somali refugee who serves Minnesota in Congress. Of course he would spout a baseless theory that she’d once married her brother.

Snopes pointed out the absurdity of this racist, I mean "not racist", trope:

“If Ahmed Elmi were truly Omar's brother, why would he have needed to take the drastic step of marrying her in order to secure a path to U.S. citizenship? U.S. Citizenship and Immigration Services policies qualify immigrants as eligible to apply for permanent residency status (and later become naturalized citizens) if they are the "spouse of a U.S. citizen" or the "brother or sister of a U.S. citizen." Why would Omar commit a federal crime and risk a prison sentence (and possibly her own citizenship status) in order to provide her brother with the opportunity to apply for something he would already have been eligible to seek?”

After that “not racist lie”, Trump moved on to praise his crowed for sharing his good Aryan genes.

“You have good genes, you know that right?” Trump said to the nearly all-white crowd. “A lot of it is about the genes, isn’t it? Don’t you believe? The racehorse theory. You think we’re so different? You have good genes in Minnesota.”

That was mighty white of him to declare genetic superiority in his followers.

I think we already know how they would perform. His “racehorses” would prove to be swaybacks ripe for pasture.

And pay no attention to “commies” who write, “It is no longer socially acceptable in many quarters to identify oneself as racist. Instead, many Americans purport not to see color”.

This Martin Luther King Day is when Trump's white Americans with good genes, and who “don’t see color”, celebrate their shared struggle for equality. The delicate souls now FEEL like they are the "real victims" of racist persecution.

In 2021 the harsh reality of their plight was finally brought to light in, of all places, the “fake news, America-hating, enemy-of-the-people” media.

“More than half of Republicans think minorities are favored over Whites in the United States”.

No wonder they FEEL so oppressed by the 1619 Project and Critical Race Theory, they want to ban those “Anti-American racist” works everywhere forever. Nobody wants to know the history and effects of slavery and racism in America while white conservatives suffer the cruelties of racism more than Black Americans.

They don’t want to hear any claptrap about systemic racism if it isn’t about them, the “real victims” of racism and discrimination. Those Black and Brown immigrants have no idea how much they have it made in a system that works for only them. Just look at how the “Marxist Kenyan” Obama defiled the White House and the “incestuous” Ilhan Omar disgraced the House of Representatives.

It’s time the rest of us follow their example and learn from white Trump supporters.

We should judge them by the content of THEIR character.

Your comparison is totally delusional and only expose4s the mind of a hate filled liberal.

Thanks for your low-information projection. Beats reasoning and citing facts, doesn't it?

Back to the kids table for you.

The Trumpistas are all suffering from the fear of being displaced by POC and possibly being treated the way POC are treated in this white man's country.

This misplaced fear is reinforced daily by the anti-American Murdock empire and its rabble rousers -- fearful Trumpista white men.

I don't think America will ever get rid of the stench of Trumpism.

All I can do about it is vote against Trumpism and continue to give thanks for not having the misfortune to have to live in a Trumpista state.

Spoken like a true liberal who thinks his side has had nothing to do with the downfall of America in the last 50 years.

Anonymous,
Spoken like a true reactionary with nothing of substance to contribute.

If you want to know what I think, I have the written words for you to read, which you've not shown any indication of doing.

But you reveal more about yourself than you can imagine.

You're unable to address ANY of my points, probably out of intellectual weakness and willful ignorance of facts.

And you won't address anything because you're filled with lies and arrogance, thinking you have all the answers.

That's the reason you can't show one fact or the ability to reason.

And people like you are how a country falls into the disorder and chaos that authoritarians always exploit for power.

And I'm on the side of humanity, logic, reason, compassion, consciousness and conscience.

That leaves your side with the ignorance, fear, hate, and lies.

Feel free to provide facts that show I'm mistaken, or see the light and agree, or bug off back to your pit of soulless darkness, delusion, willful ignorance and hate.

Shaw,
I'm lucky to be in a blue state, forged by the will of the people. Ballot initiatives cleaned up gerrymandering and protected reproductive rights in Michigan.

Thankfully "Anonymous" MAGA types failed to take power and are in the minority.

No wonder the simple-minded Anonymous sheep above hate democracy.

No reason to point out facts you have already written you hate filled facts.


This would be hilarious if it wasn't poison to our republic:

"No reason to point out facts you have already written you hate filled facts."

"No reason to point out facts."

No words would fit better on their statue of Trump in their neo-Nazi New Confederacy.

Anonymous said...
Spoken like a true liberal who thinks his side has had nothing to do with the downfall of America in the last 50 years.


The Democrats didn't put into office a twice-impeached Liar, Cheat, and Fraud, who instigated an insurrection against his own government, based on the Big Lie, with mobs calling for the death of his own vice president.

Oh, I forgot to mention his stealing top secret documents, lying to the government about having them, and refusing to return them to the government he plotted to overturn because he couldn't stand the idea of his losing an election.

Trump, the Great Disrupter and Destroyer of American political norms, is distinctly responsible for the shit show this country is in. The Democrats are no angels; but the Trumpublicans are insane and dedicated to burning what's left of this country down.

Steve Bannon, a felon who Trump pardoned, is an American Svengali, hellbent on that destruction -- by his own admission.

Shaw,
Thanks for the facts on Trump and his cult. No wonder the cult thinks facts are "hate filled". They reveal THEIR hate.

The Trump cult is so hate-filled because they surrendered their minds and conscience to a vain narcissistic sociopath who convinced them that patriotism means hating fellow Americans of conscience who know better.

When Trump is gone, their dishonor will remain.