“The streets of our country are in turmoil. The Universities are filled with students rebelling and rioting. Communists are seeking to destroy our country.” – Adolf Hitler

“I have here in my hand a list of 205 [State Department employees] that were known to the Secretary of State as being members of the Communist Party and who nevertheless are still working and shaping the policy of the State Department.” - Senator Joseph McCarthy

We heard it recently:

“Like it or not, we are becoming a communist country. That’s what’s happening, the radical left democrat communist party." - Donald Trump

We even heard it in the previous comment thread:

"I never said "democrats are communists who hate America". But since you brought it up, prove they aren't." -  Peter Henderson

“Commies are everywhere! The democrat communist party wants their Marxist CRT in grade schools and math books! Commie teachers are brainwashing our children!” 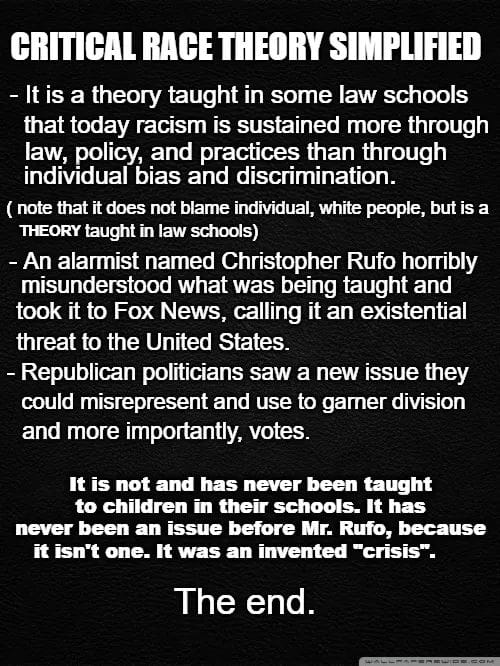 The following exchange is from the comment thread at fellow blogger Tom Degen’s post on Marjorie Taylor Greene, “The Queen of Accidental Comedy”. And yes, she also said, "The Democrats are launching a communist takeover of our country with their so-called "infrastructure" bill and Biden's budget."

MTG is a nut job. Luckily she is a rarity on the conservative side and on the far fringe.

The left's nut jobs are many and currently in positions of great power, hence the calamitous decline in our nation and world standing. Biden should be in the Alzheimer's wing of an assisted living home and not in the oval office. I guess the leftist lunatics really in charge find him to be a useful mouthpiece despite the nonsensical crap he spews each time he tries to speak to the public though. It is scary because the leftist fringe IS the mainstream of that failed political movement now.

These delusions are held by most conservatives these days.

I recall when Democrats were for the average Joe. Now Joe is for the far left fringe special interest groups, including ones that are self-avowed Marxists that do indeed despise America. These are not your father's Democrats anymore.

Darrell and MTG are on the SAME PAGE in that hateful ideological position. They think Democrats are commies.

Lately it seems anyone who supports democracy, voter rights and public education and healthcare is a "commie" to the fascist Trumpists.

Republicans have ALWAYS supported the rich and their agendas. They will cut food stamps for the poor and gut Social Security to give the rich more profits and tax breaks. We all know this.

Darrell has no problem with those who serve mammon over human beings.

I challenge Darrell to show us the names and statements of "avowed Marxists who indeed despise America" that Biden supports.

But he BELIEVES it, and that is all that matters to him. Beliefs and Trump both trump facts with the radical Right.

Hell, the Republican Party claims Trump's attempt to overturn the election by sending his mob to storm the Capitol was "legitimate political discourse".

Can they be any more pathological in their lies?

Your fathers' Republicans were NOT Trumpists who stormed the Capitol to overturn a fair election because their Dear Leader is incapable of admitting he lost.

Just ask Darrell for evidence that the election was stolen.

I hope you have a long time to wait for his answer. He banned me before responding to this question.

He'll take just as long to inform us of the "Marxists" that Biden supports.

I like Darrell, but I've witnessed him go from condemning Trump's incitement of his violent mob to defending the Big Lie that resulted in this horrible violation of our democracy and termination of our legacy of peaceful transition of power.

This is from a supporter of Trump and his coup.

We know what's behind this hatred. It's because the Biden Administration are all "communists", amirite?

This patently dishonest and delusional red-baiting and commie-calling serves only one purpose. It lends justification for the radical Right to HATE their fellow Americans who happen to disagree with them.

This is exactly the scapegoating and demonization that fascists and white nationalists employ to ramp up their false sense of victimization and blame for their opponents.

"If you don't agree with me, and believe Republicans and Trump, you obviously hate America! Trump won! Stop the steal! You're ALL commies."

One recent example is their hysteria over Critical Race Theory.

They inflame moral panic and bitter resentments by falsely saying CRT  is taught in public elementary and high schools. They don’t understand this is not true, nor do they comprehend what CRT even is. Their propagandists define it for them, saying it is “Marxist indoctrination that teaches kids they are racists who hate America”.

We've seen this movie before. Their hate and lies are self-fueling and self-fulfilling.

If Trump can incite a mob to storm our Capitol, he can incite his cult into even more acts of violence and terrorism.

Remember he told the thugs they were "special" and he loves them.

All he has to do is declare open season on liberals, progressives and Democrats, and his enraged cult would start picking us off.

The hate and false justification for their hate are already in place.

They see dangerous enemies in those of us who promote racial and gender equality, equal justice under law, fair elections, voter rights, public healthcare and public education.

Their culture war is only one command away from open civil war. They await their Dear Leader's order to start shooting.

This is proven by the arrests of his Proud Boys and Oath Keepers who have admitted to it. They were told to “Stand back and stand by”.

They lust for the blood of Americans whom they've been indoctrinated to hate, and see as enemies.

I pity them, but fear them. They are dangerous, and have proven to be a domestic threat as great as Jihadist terrorists.

Dave Dubya May 13:
"We've seen this movie before. Their hate and lies are self-fueling and self-fulfilling. If Trump can incite a mob to storm our Capitol, he can incite his cult into even more acts of violence and terrorism. Remember he told the thugs they were "special" and he loves them. All he has to do is declare open season on liberals, progressives and Democrats, and his enraged cult would start picking us off. The hate and false justification for their hate are already in place. They see dangerous enemies in those of us who promote racial and gender equality, equal justice under law, fair elections, voter rights, public healthcare and public education. Their culture war is only one command away from open civil war. They await their Dear Leader's order to start shooting."

Of course, thanks to their fascist propaganda, some of them have been ready to start their war without orders from their Fuhrer. Note how whites are the "REAL victims".

Buffalo NY May 14:
Erie County Sheriff John Garcia called the shooting a hate crime.
“This was pure evil,” Garcia said. “It was straight up racially-motivated hate crime from somebody outside of our community, coming into our community and trying to inflict that evil upon us.”

Eleven of the 13 people who were shot are Black and two are white. At a press conference Saturday night, New York Gov. Kathy Hochul (D) called the shooter “a white supremacist who has engaged in an act of terrorism, and will be prosecuted as such.”

The Buffalo shooter says in his manifesto he learned from memes on 4chan that white people were dying off quicker than Blacks, and that the average Black person takes $700,000 in money from government handouts. He believed whites are victims of genocide and “Jews” are behind it. He says that he chose the location because that zip code had the highest Black population. He wants Black people to return to their home countries. He’d feel less bad knowing all the Blacks he killed are criminals but either way they’re “replacing us” on “our land”. There are DOZENS of pages of “memes”, bullshit charts, infographics and links to proof of how genetically inferior Blacks are to white people and how we are inherently less intelligent and more violent. Then another dozen pages “proving” Jews control everything.

May 14, 2022: Ted Nugent’s message at Trump’s rally, “I love you, but I would love you more if you went out and just went berserk on the skulls of the Democrats and the marxists and the communists.”

1. The use of mass communication to incite random actors to carry out violent or terrorist acts that are statistically predictable but individually unpredictable. 2. Remote-control murder by lone wolf.

Plenty of enemies ravage though your head daily Seek help

Anonymous,
Thanks for the tip. It would help if you had actually read what I wrote.

If not for the enemies of truth, democracy, equality and decency, I'd have none.

And I have a lot of help.

Luckily I had over 81 million voters help me remove one such enemy from the White House.

"I never said "democrats are communists who hate America". But since you brought it up, prove they aren't." - Peter Henderson

Correct me if I'm wrong, but weren't the people who tried to overthrow a free and fair election Trump worshippers and supporters? Those people actually screamed "HANG PENCE!" We saw with our own eyes what Trump's thugs did on J6! Not since the British stormed the US Capitol had this ever happened! And this Henderson dude laughably says Democrats "hate America?"

There's something terribly wrong with him. To see what happened with his own eyes and blame Liberals, calling them "communists" is indicative of some sort of brain malfunction.

Henderson is not communicating in good faith. Like the harridans and liars over at FAUX NOOZ, he's vandalizing the truth.

The FAUX NOOZ liars do it for money; what's Henderson's excuse?

Shaw,
People like Pete Henderson have no insight into their radical Right indoctrination. We can't expect good faith discourse from extremists, on the far Left or far Right. The problem is, a third of our country is caught up in the bigotry, hate, and lies of the Trump Cult.

All they can do is regurgitate the propaganda, deflect, and project the worst of their nature at others. Facts, logic, and reality are out of bounds for cultists. But anger, blame, resentments, paranoia, and hate are fueled and amplified in their cult bubble.

Every racist in America is howling about Black criminals lately for some reason...