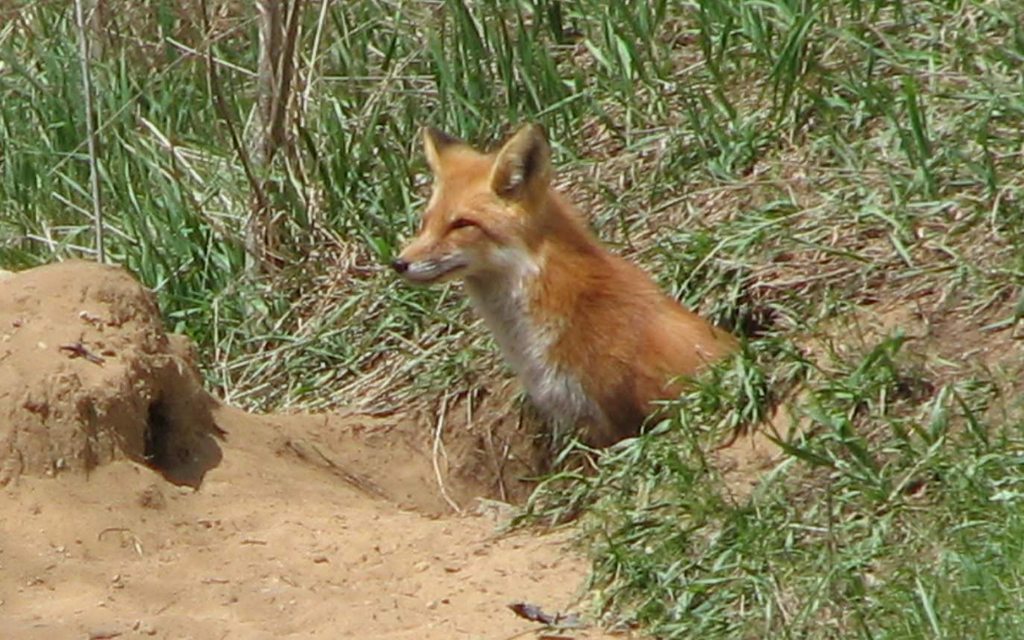 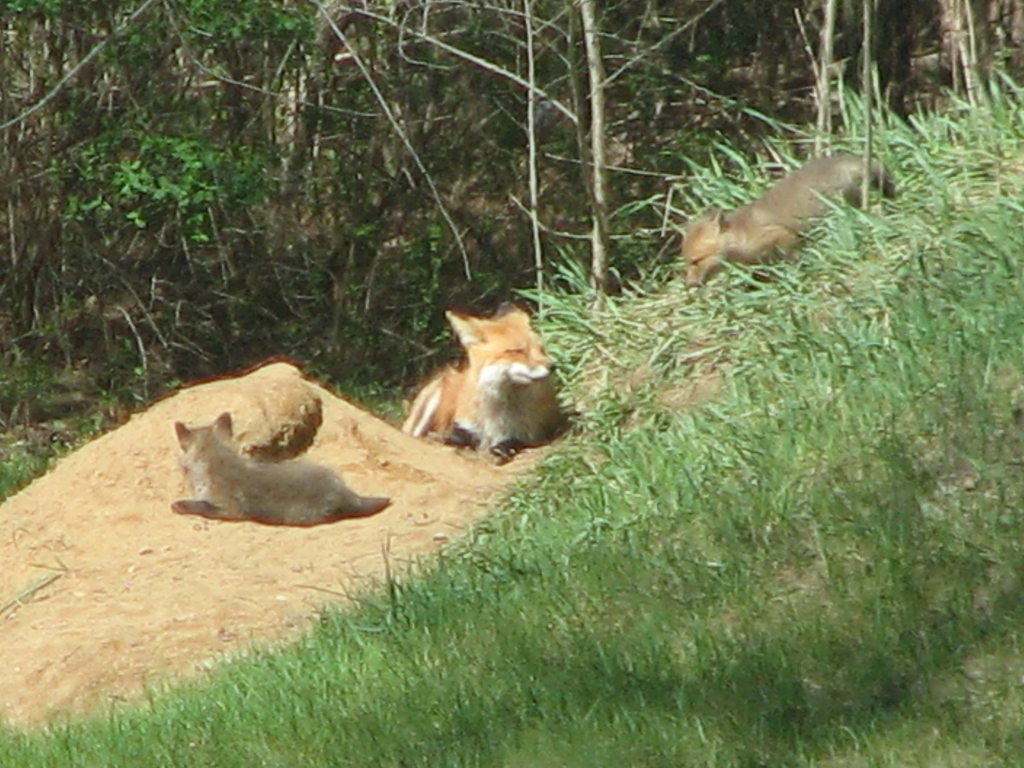 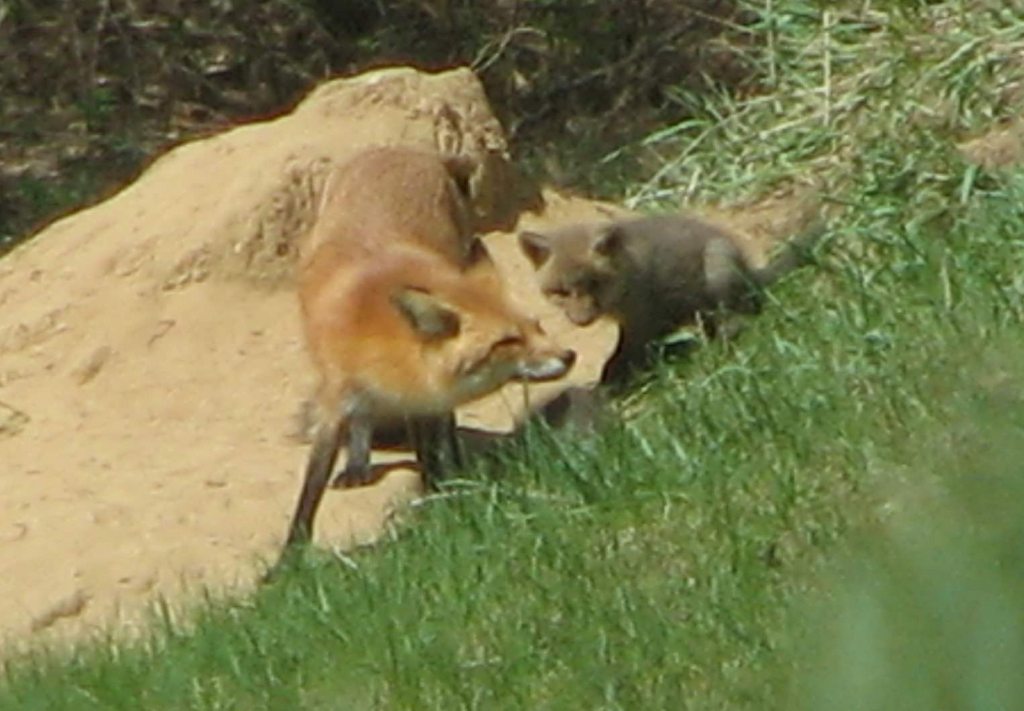 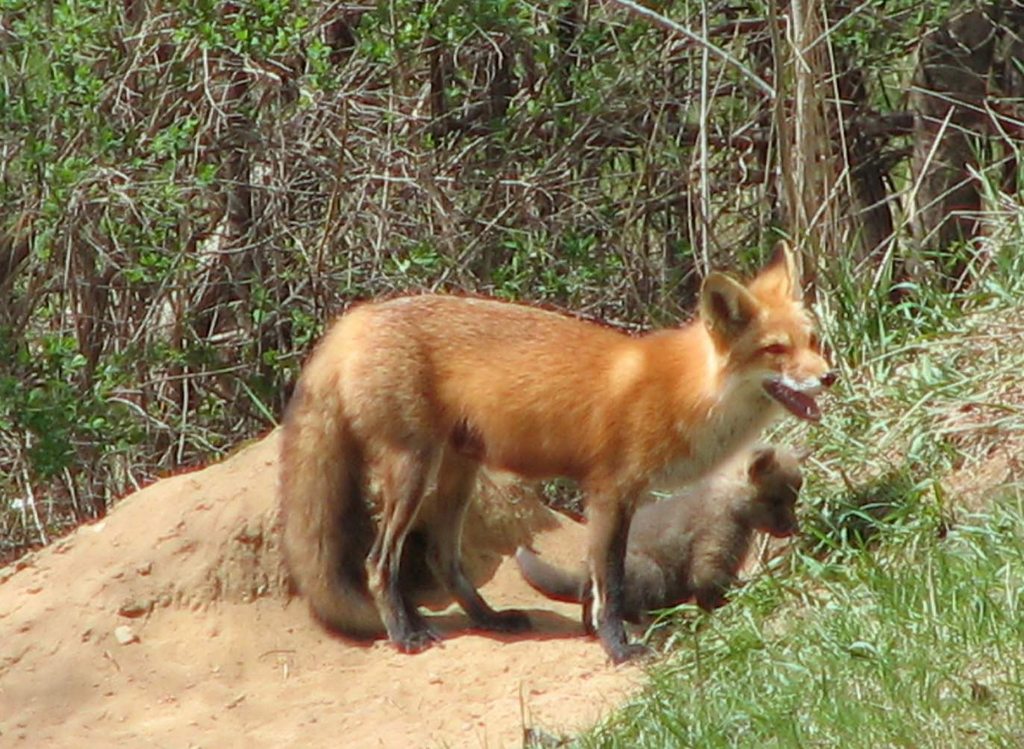 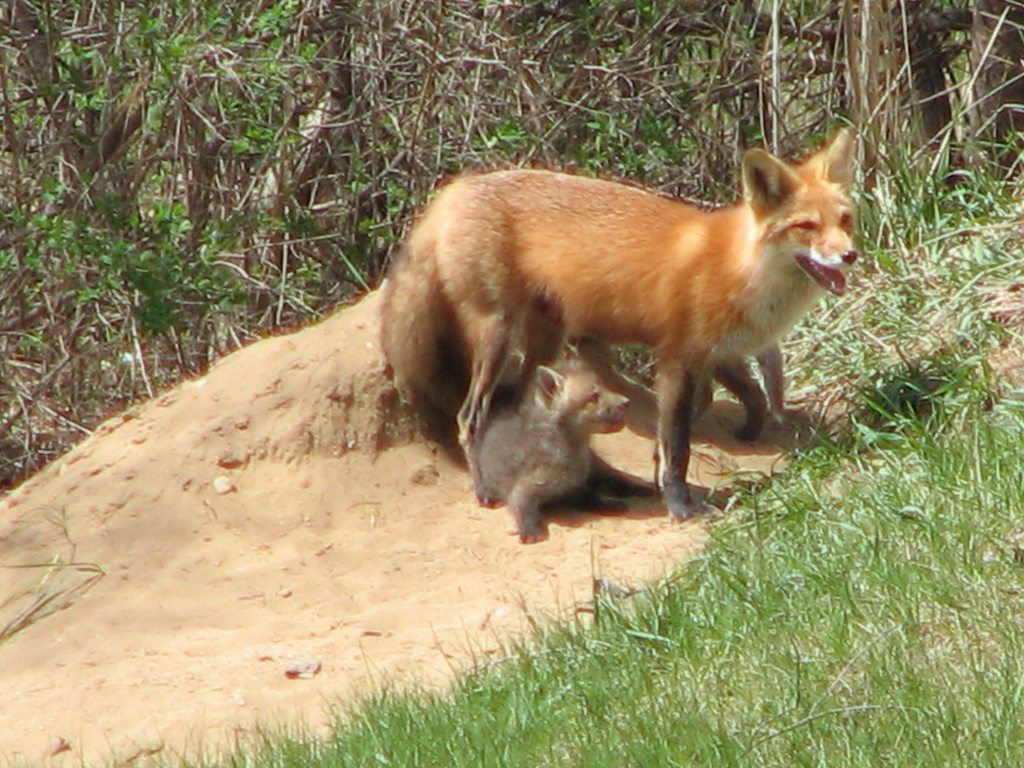 Love those. I had a gray fox here for a few years and the experience was wonderful to share their world. I want them back :)

All we have here in Texas Gray Fox. In Missouri we had Reds like these. Are they on your property?

I love your video!


What a perfect play garden for those little critters.

What can be more fun than watching young kits chase, pounce, tussle and tumble?

They are top shelf cute all the way. Such a joy it is to watch them. I bet they bring us all a laugh, or at least grin of delight.

I was pleased to see both parents as well. I soon learned there was an alpha kit. She was always the first and closest to Mama. I assumed it was a she for some reason. She was also the first to observe and imitate Mama.

Mama was so tolerant of the kits charging downhill and pouncing on her. They loved to practice pounce.

I watched the little ones learn one important rule in the Fox family. "Do Not Pounce On Papa!" He would turn and give a little snap at them, maybe teaching them to be prepared for resistance when they hunt. Or he was just grouchy. ;-)

We are very lucky to have been treated to such a beautiful and entertaining gift of Nature.

I can see the den from where I now sit and type. Pretty convenient.

For once we are all three Fox Watchers. How about that!

It's about time, lol.

Fox are so cool to be around. Enjoy!

Hide 'em, quick! Before Trump splits up the family!

Dave, finally, an intelligent version of "fox and friends". :-)

Nice pics. Every once in a while I see a red fox on my property. Never have had a den, though. Are these occupants every year?

JG,
They've used the den two of the past three years. First they dug under my tool shed, but I was too much a presence there getting at the lawn mower and stuff. We were all happier when the moved into view of my study window. I watched them for hours of old Disney TV style entertainment.

Foxes are great, coyotes not so much. Foxes have never caused us a problem, but coyotes killed our cat. You can't have an outdoor cat cause it will either be roadkill or a coyote will eat it.
Fox kept the field mouse population down in our garden, but since stupid neighbor had it trapped and moved, we only have Rattlesnakes to keep vermin in check. I'll take a fox over a rattlesnake any day. Thankfully we have some roadrunners living near by which keep snake population in a natural balance.

It's predicted to be 103 here today, Cleveland, where we are flying tonite, will have a high of 77...time to start looking for a summer home, lol.

MM,
We had a stray outdoor cat that tangled with a fox. I heard a screech and commotion outside, and found the cat standing against the house and a fox hiding in nearby brush. The cat had one bite wound on the hip, but I'm guessing the fox got a claw to the face and retreated.

The cat could be aggressive. I wouldn't be surprised if she started the fight. It was a draw. Cats are not easy prey for a fox. I witnessed a confrontation between a fox and groundhog once. That was also a standoff, and when the fox turned its head, the groundhog scooted away.

They have some sharp teeth. My German Shepherd wasn't so intimidated, though.

I have a friend in Arizona who caught some footage of two bobcats scrapping in his yard.

I doubt a fox has the jaw strength or jaw size to inflict real damage to a large cat or for that matter any other medium sized predator.
The fox in Rain's video appear to be close to what we have here, but smaller and more red color. Which direction does their den face, north, south, etc?

Fox population came and went over the years at the golf course where I worked. Young ones would play chase like crazy and a blast to watch.

The little shits mostly on 16 and 17 would steal your ball right off the fairway and they have approached me on the green. Mexican standoff - I'd take a step a little closer to the ball he'd take one. It was all a game.

I wish you had a video of that!

One Fly,
What's the penalty for a Kit grabbing the golf ball?

Mmajor there is one in a way. I had already been around a couple times and got just far enough away he grabbed this carcass. I'm not sure what it was it looked like it could have been a snowshoe hair.
https://youtu.be/_4jk7TwtzxI

It has been over a month. Are the pups getting big?

Those pictures were taken in late April/early May. They grow up fast.

The wild turkeys are back, so I know the little ones are now finding their way in the world.

Oh yeah...on their own now. All grown up.

Thanks for the fox news update! :-)